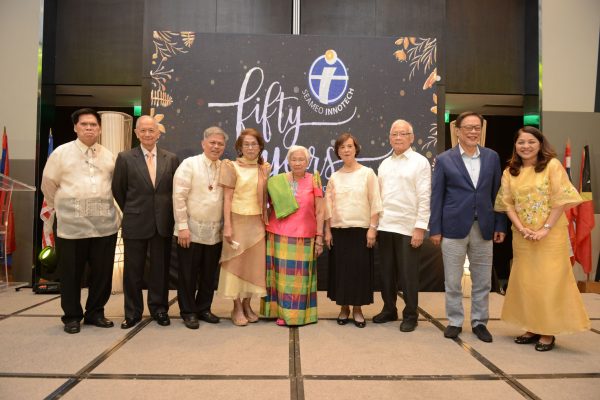 INNOTECH attributes its long-standing success to the people who have dedicated their effort and shared their expertise, as well as the institutions and organizations that have trusted and collaborated with INNOTECH. As a way of expressing gratitude, INNOTECH held a two-part golden anniversary celebration on 23 and 24 January 2020.

The celebration held on 23 January 2020 was dedicated to INNOTECH’s partner institutions, organizations, and government agencies who have worked with the Center throughout the years and helped the Center grow to what it is today. Representatives from about a hundred partners of the Center attended the celebration, including six former secretaries of the Philippine Department of Education (DepEd)—Dr. Jaime Laya, Dr. Erlinda Pefianco, Dr. Edilberto De Jesus, Dr. Jesli Lapus, Dr. Mona Valisno, and Bro. Armin Luistro—along with the current DepEd Secretary, Hon. Leonor Briones, and Director of the SEAMEO Secretariat, Dr. Ethel Agnes Valenzuela who is also a former INNOTECH staff.

Aside from recognizing the contributions of INNOTECH partners, the celebration also served as a venue for launching the new INNOTECH Hymn, Anniversary Video, and Anniversary Website.

Sung by the UP Concert Chorus, the improved INNOTECH Hymn has been aligned with the current realities of the region and gave more focus on the future of learning. From merely an output of a training course in the ‘70s, to a song that commemorates a course completion, the INNOTECH Hymn is now a song that celebrates the achievement and growth of INNOTECH as a Regional Center contributing to the improvement of education communities in Southeast Asia and beyond.

The growth of the Center throughout the past five decades was further showcased in an Anniversary Video. Messages from partner organizations, institutions, government agencies, and alumni are a testimony of INNOTECH’s commitment to providing a better future for every learner. More stories of the Center’s stakeholders may be read through the Anniversary Website that was also launched during the celebration. While the website is part of the 50th anniversary, it will be continuously updated with more inspiring stories in the future, immortalizing the experiences and stories that have helped and continue to shape INNOTECH.

The second part of the celebration, held on 24 January 2020, was like a homecoming. Former and current staff of the Center celebrated this big milestone together, sharing stories of how the Center has grown and changed throughout the years.

“All staff, those who have been with us in the past and those currently here, have contributed to the success of the Center. This celebration is our way of saying thanks to the staff who have been with us throughout these years.” Center Director, Dr. Ramon C. Bacani said on his welcome remarks.

Along with the celebration of the anniversary, staff who have been with the Center for 20 years were recognized during the event—Ms. Ma. Stephanie Fabria, Manager of the Finance and Administrative Management Office, Mr. Rolan Mallare, Senior Officer of the Systems Management Unit, Dr. Sharon Joy Chao, Manager of the Learning Management Office, and Ms. Joan Atienza, Senior Associate from the Instructional Design and Development Unit. Their stories of success reminded the staff of the value of loyalty, not just to the organization itself but also to the work it does and the goals they want to achieve.

A golden anniversary is a big milestone for any organization. Fifty years has been long, a lot of things have changed, and much has been achieved throughout those years. But there’s still a long way to improving the status of education in the region. And INNOTECH will continue to be present in that journey to provide a better future for every learner in the region and beyond.

Essentials of Strategic Thinking and Innovation

It highlights the need for the competency, reframes the learner’s understanding of its related concepts within the context of education, and brings the learner to reflect on the competencies of strategic thinking and innovation.