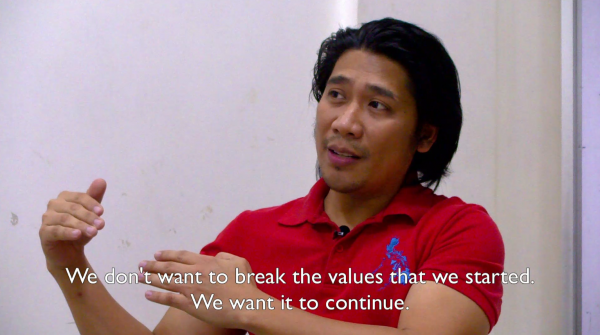 Posted at 00:00h in General Public by admin
1 Like

Efren Penaflorida, 2009 CNN Hero of the Year, shared his dream to put up a college for disadvantaged children. “We don’t want to break the values that we started. We want it to continue. So, maybe in the next 10 or 15 years, we can build a College,” he said.

In a Facebook Live Session on 9 February 2018, Kuya Ef, as people call the head of the Dynamic Teen Company (DTC) —talked about the struggles their team went through before receiving CNN award. The Kariton Klasrum (Pushcart Classroom) that he started grew from one simple ‘kariton’ (push cart) to a nationwide education bridging program.

“When we first started pushing carts here in Cavite, it was not accepted. The pushcart is not a symbol of education, it’s a symbol of poverty in the Philippines.” Kuya Ef said, sharing the story of how people looked down and mocked the group when they first started. Although the team sometimes felt discouraged, their passion to continue the program grew in seeing the sparkle in the children’s eyes. According to Kuya Ef, the huge love and passion of the volunteers is what keeps this program going. It is what made the Kariton Klasrum successful.

DTC has been helping disadvantaged children for years now, particularly the street children who do not attend formal school for various reasons. They continue to encourage these children to go back to school, by supporting them as they continue and complete their formal learning. He said that, through the years, he has come to realize that these children really want to go to school; it’s just that they lack the opportunity to do so.

Talking about inclusive education, Kuya Ef highlighted the need for children to gain access to education. “The important thing is accessibility of quality education for the marginalized,” he said, highlighting the different needs of those in the remote communities, of people with disabilities, of indigenous people, and of street children—their main focus at DTC.

For the street children who have been encouraged through this initiative, Kuya Ef and the rest of DTC have become more than just teachers. They are their friends, their older brothers and sisters, and their family whom they can turn to anytime.

The 2009 CNN Hero of the Year Award received by Kuya Ef opened many doors for the program. People started to take interest and give support. The group gained more volunteers and supporters. They were able to reach more street children.

In 2011, the Philippine Department of Education (DepEd) adopted the Kariton Klasrum idea as part of the Alternative Learning System (ALS) Program and implemented it nationwide. The success of the program inspired other countries, particularly Indonesia, Kenya, and Sri Lanka, to replicate and localize the program.

“We were so happy because we really wanted to share the idea,” he said. “It provides access to education for those who are in the streets and cannot go to school,” he added.

In partnership with DepEd, it has now become easier for the team to bring the children back to school. After a 6-month program with DTC, the children are then turned over to the nearest partner DepEd School for them to continue and finish formal schooling.

The Future of the Kariton Klasrum

With the K-12 reform in place, DTC expanded by starting to implement DepEd programs such as the Open High School and Senior High School. DTC recently opened up Ecodemya, an environment-friendly school, in Halang, Cavite, primarily catering for Senior High School scholars.

Kuya Ef shared his story and vision at the Facebook Live session as a prelude to the 15th SEAMEO INNOTECH International Conference. Kuya Ef shared the Kariton Klasrum story, the opportunities that led to their success, the challenges they continue to face, and their dreams for the program and its learners.

Hear more stories of how those in the margins have strived and succeeded in addressing issues surrounding inclusive education. Join the 15th SEAMEO INNOTECH International Conference, “Thriving in the Margins: inclusive Education Re-imagined,” happening this March 6-8 in Quezon City, Philippines. Learn more about the conference and register through [https://seameo-innotech.odoo.com].

SEAMEO INNOTECH conducted a series of orientation on the enhanced Mobile Technologies for Teachers (MT4T) resources in Bangkok, Thailand from February 05 to 08 2018. The MT4T resources were presented [. . .]

In line with the graduation of GURO21 and TEACHeXCELS completers from Region XII, SEAMEO INNOTECH established its Alumni Association and re-launched its Alumni Portal [. . .]