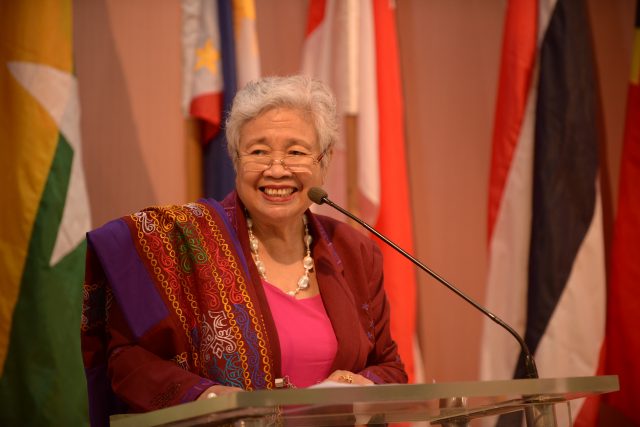 “Education must continue no matter what,” Philippine Department of Education Secretary, Dr. Leonor Magtolis Briones, stressed in her Keynote Speech during the 61st SEAMEO INNOTECH Governing Board Meeting, held on 17 October 2017. She further explained that it is the Department’s primary role to make sure that education continues despite natural disasters, poverty, and even armed conflict.

Speaking before senior education officials of the 11 countries that comprise the SEAMEO INNOTECH Governing Board, Sec. Briones expressed her appreciation to SEAMEO INNOTECH for its contributions in aid of Philippine education reform, as well as that of other SEAMEO member countries. “The Philippines has been hosting SEAMEO INNOTECH for years now. The Center continues to strive mightily to serve the country’s needs,” Secretary Briones said.

Among the innovations developed by INNOTECH, the Alternative Learning Systems (ALS) was cited by Sec. Briones as one of the four priorities of the Department under her leadership, along with strengthening preventive drug education, gender and development in relation to reproductive health and environmental awareness and disaster preparedness. ALS is a parallel learning system that provides a viable alternative to the existing formal education instruction, while Alternative Delivery Modes (ADMs) are unconventional means by which students learn in formal education. She called on the education officials representing the 11 SEAMEO Member Countries, to share knowledge and experience in the different priority areas for education development.

INNOTECH has been involved in various projects and developed materials in support of DepEd’s ALS program. Among them is the K to 12 Toolkit, the research on Evaluation of the Open High School Program in the Philippines, Education in Emergencies, and Project IMPACT (Instructional Management by Parents, Community, and Teachers). Recently, INNOTECH partnered with UNESCO Jakarta, DepEd, and the Korea International Cooperation Agency (KOICA) in convening a 3-day National Forum on ALS. The Center is also currently conducting research on the different alternative delivery modalities in education that are practiced in the region.

The 61st SEAMEO INNOTECH Governing Board Meeting gathered senior education officials from the SEAMEO member countries and the SEAMEO Secretariat who comprise the Center governing board. The Governing Board meets annually to review the center’s programs, set policies and directions and approve program priorities for the succeeding year.

INNOTECH has been hosted by the Philippines since 1976. The center works towards development of education in Southeast Asia through research and innovation, training and knowledge management services. INNOTECH runs training programs for development of education professionals, focusing on educational management and leadership. The Center is currently headed by former DepEd Undersecretary Dr. Ramon C. Bacani.

SEAMEO INNOTECH and the Network of Outstanding Teachers and Educators, Inc. (NOTED) held the teachers' forum entitled, “Teacher Empowerment: Rekindling the Joy of Teaching” on 12 October 2017 [. . .]

SEAMEO INNOTECH’s flexible course, Gearing Up Responsible and Outstanding Teachers in Southeast Asia for the 21st Century (GURO21) was named one of the two winners of UNESCO’s Wenhui Award [. . .]