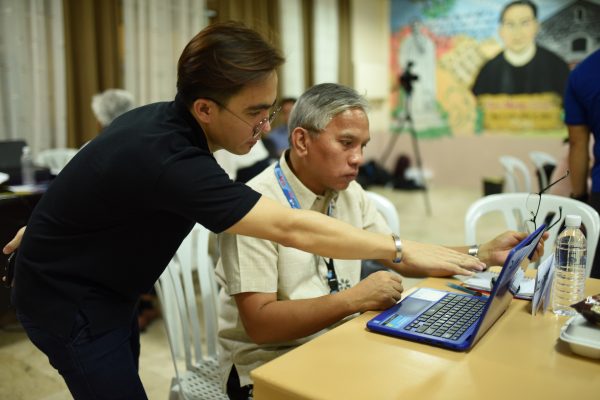 03 Sep INNOTECH conducts LEADeXCELS orientation for the Division of Manila

Posted at 00:00h in General Public, Teacher by admin
0 Likes

On 23 August 2018, SEAMEO INNOTECH conducted an orientation for the first offering of LEADeXCELS for the Department of Education (DepEd) NCR-Division of Manila.

LEADeXCELS (Excellence in Leading Education in Emergency Situations for Southeast Asian School Heads) is a course offered to school heads. It aims to provide them with the basic competencies to successfully lead their schools to become more resilient and better prepared in facing disasters. A total of 106 School Heads from the Division of the City of Manila attended the orientation held at Padre Gomez Elementary School in Sta. Cruz, Manila.

The implementation of the course for the Division of Manila is part of the LEADeXCELS500 project of SEAMEO INNOTECH. This is a scholarship grant for selected school heads of DepEd Regional Offices to participate in the LEADeXCELS flexible learning course. The project aims to support DepEd in its thrust of building the capacity of school heads in managing the safety of their learners and communities in times of calamities and other emergencies.

In his speech during the ceremonies that marked the maiden offering, Center Director, Dr. Ramon C. Bacani thanked the officials of the Division Office led by Schools Division Superintendent and SEAMEO INNOTECH Alumna, Dr. Jennelyn Corpuz, for accepting the offer of scholarship. He also shared that the scholarship grant for the LEADeXCELS course has been given to then DepEd Secretary Bro. Armin Luistro since December 2014.

In turn, Dr. Corpuz thanked Dr. Bacani and SEAMEO INNOTECH for identifying the Division of Manila as one of the recipients of the scholarship grant. She also challenged the participants to do their best in order to receive the highest rating or A+ for completing the course.

In celebration of the National Teachers’ Month, SEAMEO INNOTECH, in partnership with Edmodo, facilitated a one-day free training workshop on the use of Edmodo in the classroom. The workshop held on 21 September 2018 at SEAMEO INNOTECH was participated by [. . .]

From 2 to 4 August 2018, SEAMEO INNOTECH conducted a series of orientation for its flexible courses namely GURO21, TEACHeXCELS, and SUPEReXCELS in Regions VII and VIII. In coordination with the Division of Naga and from Leyte Normal University [. . .]