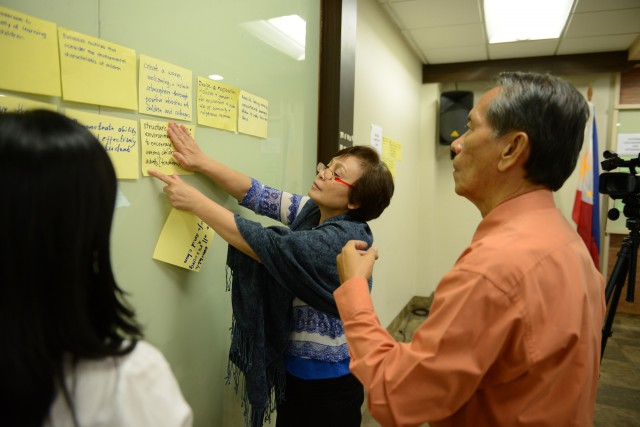 Early childhood, defined as the period from birth to eight years old, is tagged as the crucial years for nurturing the child’s mind and body. With this period recognized as the bedrock of lifelong learning and development, ECCE has been identified as a priority by numerous development organizations, including SEAMEO. An important driver for successful ECCE programs is the teachers and practitioners behind it. To ensure that they competent on the job, an ECCE Teacher Competency Framework is seen as necessary.

During the two-day workshop, a small group of participant-experts from academe, government, and from a pre-school in the Philippines provided valuable inputs toward the development of a draft competency framework. SEAMEO INNOTECH made use of the developing a curriculum (DACUM) approach to surface occupational definitions of ECCE teachers, and to come up with general and enabling competencies of ECCE teachers.

The draft competency framework developed during the workshop, will be validated through a questionnaire which will be sent to ECCE teachers and education ministries in 11 SEAMEO member countries in Southeast Asia and 15 Pacific Small Island Developing States. The results of the survey will be analyzed and presented during a series of consultation workshops prior to finalizing the ECCE teacher competency framework.

On 30 March 2017, SEAMEO INNOTECH sealed its partnership with the University of Rizal System (URS) for the implementation of eXCELS (Excellence in School Leadership for Southeast Asia) and GURO21 (Gearing Up Responsible and [. . .]

TEACHeXCELS and GURO21 conclude in 2 regions

Over a hundred teachers and school heads from Region VII and Region IV-B successfully completed their flexible courses this month of March. A revalida and graduation for TEACHeXCELS and GURO21 happened last [. . .]