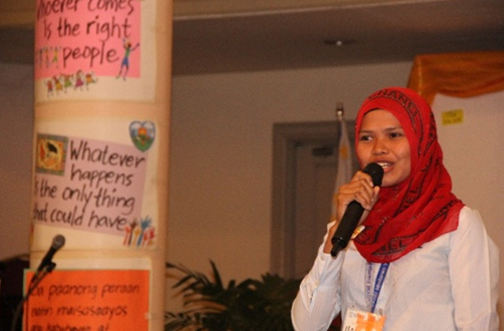 “We suffer the stigma of being an out-of-school youth – ‘pasaway’ and good for nothing… Now we are being considered role models and agents of change in the community – that’s a big leap! We are grateful for your genuine concern and for your faith that we can do it.”
– Halima Sahim, OSY leader from Lamitan City

SEAMEO INNOTECH, in partnership with USAID’s Mindanao Youth for Development (MYDev) Project, facilitated the crafting of an Out-of-School Youth Development Agenda for the next 12 months covering eight conflict-affected areas in Mindanao. During the two-day gathering, the participants were invited to a deep conversation about the youth and the many ways they can improve the livelihood and civic engagement of out-of-school youth (OSY) in their communities.  This initiative consisted of three batches of gathering, with a total number of 123 participants.

Using open space technology and appreciative dialogues, youth leaders and government agencies together with the other members of the Out-of-School Youth Development Alliance (OSYDA) defined the OSY development agenda, clarified their roles and responsibilities as OSYDA members, and agreed on the working arrangements that will best work for the alliance in order to carry out the plans. The OSYDA, a mechanism created by MYDev that will pursue OSY development, is composed of representatives from the local government units, line agencies, non-government organizations, academe, and the youth.

The first batch of conversation was conducted in Davao City on 10-11 September 2014. It was attended by the OSYDAs from Parang, Manguindanao, Marawi City, and Cotabato City. Given the many concerns that beset OSYs in their communities, the participants offered solutions such as values formation and skills training, provision of job opportunities for the trained OSYs, strengthening civic engagement among the youth, creation of an integrated youth development plan for every alliance, and strengthening relationships between and among the different member agencies. Each OSYDA, however, came up with a different set of priority areas given the context and requirements of their communities as well as the needs of their OSYs.

“We were able to tackle a number of issues during the 2-day workshop, but I didn’t feel exhausted. I appreciate that we talked about possibilities and solutions, rather than problems and issues.” said Mayor Ibs Ibay, Municipal Mayor of Parang, Maguindanao. 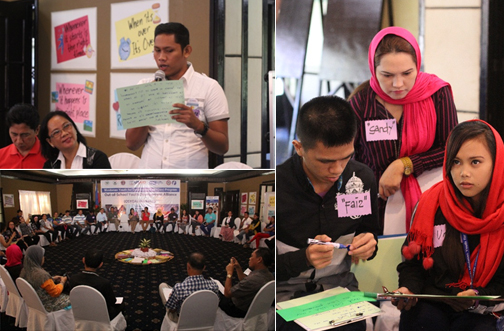 The second workshop was held on 16-17 September 2014 and consisted of participants from Isabela City. Among all the alliances, this OSYDA was the first to be organized and is more established in terms of alliance composition, appreciation of the project vision and objectives, and role identification. As a result of the workshops conducted, the participants identified skills training, education, livelihood projects, comprehensive youth formation program, and ensuring sustainability of programs as promising ways to improve the livelihood and civic engagement of OSYs in their communities.  Just like the first batch, they also listed down specific programs and activities, as well as needed resources, and decided among themselves who is responsible for seeing through the identified programs and activities. As a major step, they agreed to form an association of OSY completers and conduct an educational tour to other areas, for benchmarking of best practices in youth development programs.

The last gathering happened in Zamboanga City on 23-24 September 2014, with participants from Zamboanga City, Lamitan City, Indanan and Jolo. Among the many solutions they have identified are profiling of OSYs, values formation, capacity building and post-training support initiatives, creating jobs through employment and livelihood, and sustaining all efforts as priority areas.  They also recognized the need to hold more conversations like this to help each other in implementing the plans they have set.

“The process allowed us to engage with leaders in our community in manner that is open and non-threatening. We felt their sincere concern for the youth. We are thankful that our voices were heard in this forum.” said Mamex Mantri, OSY leader from Cotabato City.

In all batches, developing programs on values formation among the youth is one common response. All OSYDA members are one in saying that character formation is a good foundation for initiating significant changes in the community.  The OSY leaders appreciated the opportunity to have been given voice in the conversations that concern them. Now that they’re no longer in the side lines, they see the important role they play in the success of the development plans they have co-created. Meanwhile, other members of the OSYDA expressed appreciation for the process of coming up with the plans and the quality of conversations and interactions that happened during the gathering.

“I appreciate the process – it is participative and evocative. And what’s more, the agenda came from us. We chose what we think were important and pressing, and those were not dictated upon us.” said Espie Hupida, executive director of Zamboanga-Basilan Integrated Development Alliance.

The workshop concluded with the realization that there is much to be done. However, the conversations that were opened up, relationships that were forged, and plans that were developed hold much promise for the OSYs in Mindanao.

USAID’s MYDev project is implemented by the Education Development Center, Inc. (EDC) in partnership with SEAMEO INNOTECH, along with the Philippine Technical Education and Skills Development Agency (TESDA), the Department of Education (DepEd), the Mindanao Development Authority (MinDA), local government units, and other non-government organizations.

As a response to the growing concern about facilitating teaching and learning in the 21st century, SEAMEO INNOTECH locally launched the resource kit for its project, Mobile Technology for Teachers (MT4T), last 24 October 2014 [. . .]

Taking full advantage of the many uses of mobile technologies in education, SEAMEO INNOTECH is set to launch in six Southeast Asian countries a resource kit utilizing smart phones and tablets to promote the development of 21st century skills.