Excellence of Practice: The School Head as Leader 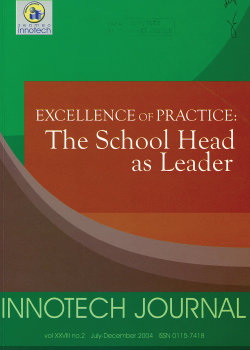 Foreword: The Ninth SEAMEO INNOTECH International Conference held in December 2004 was devoted to the people who lead our schools. The theme “Excellence of Practice: The School Head as Leader” was chosen to highlight what had been for a long time a neglected aspect of reform initiatives in education.

In opening the conference, SEAMEO Council President H.E. Pehin Orang Kaya Laila Wijaya Dato Haji Abdul Aziz Umar declared that school heads must foster a caring environment that engage the head and the heart. He mentioned the danger of the “ritualistic” and “mechanistic” tendencies of school personnel that beset the creation of a child-friendly learning environment.

This idea extends in the paper of Paulson who cautioned school heads to be wary of misusing power and authority and advocated instead the sharing of power to improve the work climate in school. The on-going implementation of the World Bank-supported Third Elementary Education Project in the Philippines, meanwhile, is the course of insights on school-based management expounded on by Robles. Successfully managed schools were found to have heads who were able to obtain and use resources in realizing their vision with the help of the community.

Abad reiterated this line of thought as he shared the experience of a school in a poor town in the Philippines that surmounted the lack of material resources by mobilizing the people and the community. Incidentally, he also pointed out the important role played by the school head that provided impetus to the remarkable achievements of the students in nationally administered exams.

Interesting points of comparison arise with Hasbulla’s report on the efforts of the Ministry of Education of Malaysia to improve the performance of school heads by arming them with skills they need to be more effective in the coming years. He confirms that Malaysia’s efforts and practices in preparing its school heads have brought positive results to the country’s education system.

Moving on to perspectives from outside the education system, Sobrepeña discussed how the business sector contributes in raising the quality of academic leadership in his paper about a national award given to outstanding teachers by a private foundation. He noted that outstanding teachers emerge from schools whose leaders have enabled and empowered their teachers to improve on their craft, make their teaching more effective and thus become models of excellence in their respective communities. From an Australian viewpoint, Baker showed the importance of policy frameworks that need to guide collaboration with private service providers when schools expand their curriculum resources through ICT tools.

This issue ends with an urgent reminder on a public health concern where the educational community needs to take an ever more decisive role. In the face of a major crisis that could potentially erupt in Asia, Mallik was clear-cut when he singled out school heads as critical actors in HIV/AIDS preventive education. He explained that the school heads’ influence within and outside the school can be optimized in keeping communities safe from the dreaded disease.

To access all articles in this issue, email us at info@seameo-innotech.org

Send us a message for inquiry on resources copy.