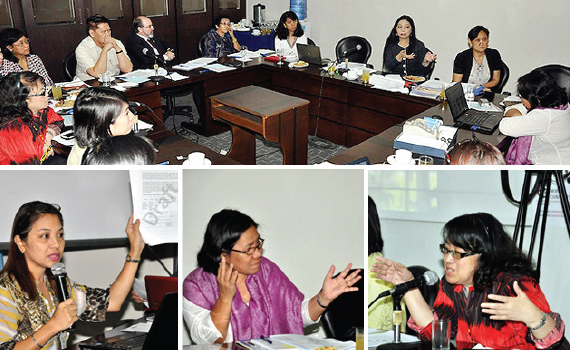 Two years prior to the culmination of the Education for All (EFA) global commitment, countries around the world are now preparing for their respective post-2015 education agenda to address “unfinished business,” new education priorities that have emerged over the past decade, and future challenges. Similarly, the technical working group of the Philippines National EFA Committee (NEC) begins its own preparations, backed up by the results of an assessment done on the country’s progress in achieving its 2015 EFA targets.

Commissioned by the NEC, SEAMEO INNOTECH conducted a research analysis of how the Philippines is attaining targets specified in the EFA 2015 National Action Plan. Senior Research Specialist Dr. Ethel Agnes P. Valenzuela presented this report to the members of the NEC TWG during a research policy forum on August 23.

Under its four main goals, the report revealed that the Philippines achieved “significant improvement” in many key indicators, with some that may even exceed key targets by the year 2015. However, there are also indicators that registered limited progress, and run a high risk of reaching its targets at all.

Some of these indicators that remain critically low in achieving targets are (1) the drop-out rates in Grades 1 to 3, (2) the repetition rate in Grade 1, and (3) the achievement rate in the National Assessment Test, as well the net enrolment rate in the secondary education level.

Guided by the results of the assessment report, and the wealth of information contained in the EFA Global Monitoring Reports from UNESCO, the NEC TWG looked next at possible areas of concentration for the Philippines’ post-2015 education agenda.

The NEC-TWG is expected to further thresh out the details of this draft proposal before finalizing and presenting to the NEC for adoption. UNESCO has set the deadline for submission of each country’s post-2015 EFA action plans in June 2014.

A delegation from the Higher Education Relevance and Quality Agency (HERQA) in Ethiopia visited the Center on August 12.

This is the full transcript of the workshop summation delivered by SEAMEO INNOTECH's Educational Research and Innovation Office Manager, Mr. Philip Purnell at the closing ceremony...