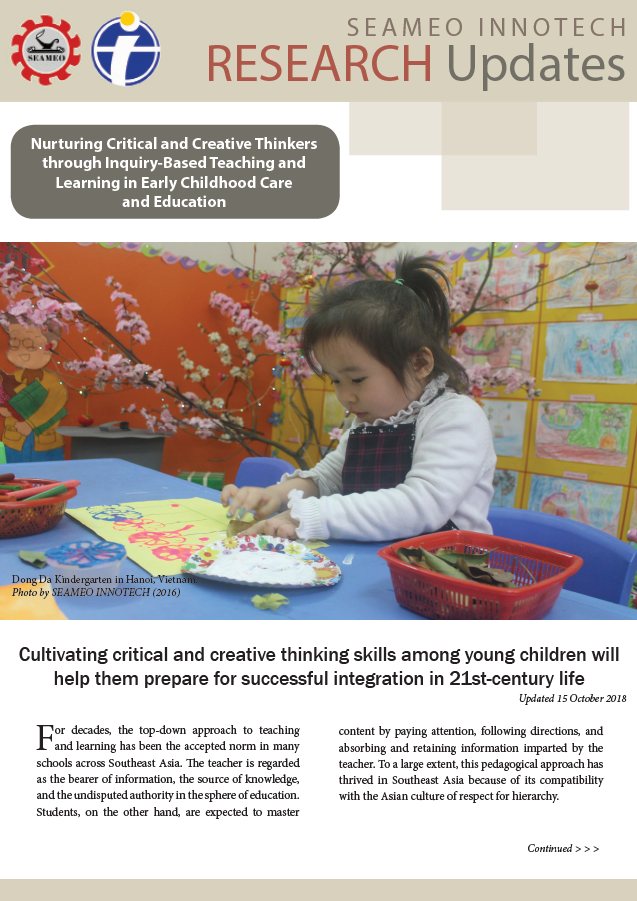 For decades, the top-down approach to teaching and learning has been the accepted norm in many schools across Southeast Asia. The teacher is regarded as the bearer of information, the source of knowledge, and the undisputed authority in the sphere of education. Students, on the other hand, are expected to master content by paying attention, following directions, and absorbing and retaining information imparted by the teacher. To a large extent, this pedagogical approach has thrived in Southeast Asia because of its compatibility with the Asian culture of respect for hierarchy.

Educators, education scholars and cognitive scientists, however, note that this traditional teacher-oriented approach to learning has become less effective in the face of today’s vastly transformed environment. Twenty-first century society is fast-paced, globally interconnected, and technology-driven, especially at the wake of the Fourth Industrial Revolution that ushers in more complex interconnection of technology, society, and even the human bodies. For individuals to successfully integrate in 21st-century life, they must be able to think critically and creatively, solve problems, communicate ideas, and collaborate with others. They must be flexible, adaptable, curious and eager to learn, culturally literate, and socially aware. Inquiry-based teaching and learning (IBTL) has been proposed as an alternative path for cultivating many, if not all, of these 21st-century skills.

How useful do you find this resource?
[Total: 2 Average: 5]